A Lesson in Reinvention from Rap Star T-Pain

A Lesson in Reinvention from Rap Star T-Pain

Rebranding is one of the most difficult challenges any company can face. It requires reshaping a cemented public narrative and uprooting people’s deeply entrenched opinions. If you suffer from a negative public perception, the task can be even more daunting.

Our job as PR professionals is to help a company rebuild its public image credibly and authentically. Success depends on our ability not only to change the conversation, but to face past criticisms head on.

Case in point? It might sound far-fetched, but we can learn a lot about rebranding and reputation management from rap star T-Pain, who has made a notable comeback in the last 6 months.

T-Pain first came to notoriety for his use of Auto-Tune, an audio processor that alters and perfects a singer’s pitch. While traditionally used in a limited manner to clean up small sections of songs, T-Pain relied extensively on Auto-Tune to create a unique sound.

And he was successful…at first. For several years, T-Pain enjoyed international fame and commercial success. However, in 2009, a wave of backlash against Auto-Tune in the hip-hop community led to criticism of T-Pain that characterized him as untalented and a joke. Rapper and mogul Jay-Z famously released his “Death of Auto-Tune” song that same year, which many interpreted as a direct attack on T-Pain.

Feeling depressed and betrayed, T-Pain took a hiatus from the music industry. However, in the last 6 months, T-Pain has engaged in a highly effective PR campaign designed to recreate his image and brand himself as a serious, accomplished musician. And it’s working…

Here’s what we can learn from T-Pain.

The main critique of T-Pain was that he wasn’t a serious musician, that he masked an overwhelming lack of talent under his signature top hat and sunglasses and overreliance on Auto-Tune.

Rather than argue, T-Pain changed the conversation, hosting an Auto-Tune-free concert on NPR in which he demonstrated great vocal range. He even donned a brand new look, replacing his dreads, top hat, and shades with short hair and a pair of reading glasses. 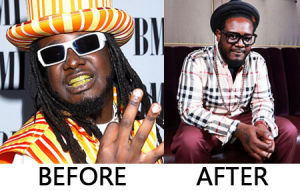 The video clip of the concert instantly went viral, generating headlines such as, “T-Pain singing without Auto-Tune will absolutely blow your mind” and “T-Pain’s tiny desk concert proves he should perform without Auto-Tune more often.” Instantly, the public’s perception of T-Pain changed; instead of a joke, he was viewed as a gifted musician.

T-Pain also understood the importance of publicizing his new look and feel in outlets that would complement his new brand. His concert performance appeared on Tiny Desk, NPR’s online mini-concert series that features some of the most respected and Grammy-award-winning artists.

He also did an in-depth interview for The New Yorker culture desk entitled The Sadness of T-Pain, further adding a level of seriousness and credibility to his new image.

Be upfront and honest:

When attempting to overcome a negative public persona, it is important not to ignore the past. Instead, get your side of the story out there proactively and transparently. By scheduling a number of interviews in top-tier industry press and speaking openly about why he felt he was unfairly attacked, T-Pain spoke directly to the general public and began to change the narrative.

In the end, it looks like T-Pain is slowing regaining his popularity and respect from the music industry. So, while it may seem comical to think your company’s rebranding strategy could be modeled on T-Pain’s, there are a number of important lessons to learn from his latest PR offensive. Most important for the success of any rebranding effort is to find ways to change the conversation and to communicate your message directly to the public – the T-Pain way.