Are We Still “On Message”?

Are We Still “On Message”?

Group Gordon’s Jordan Miller blogs about the importance of staying on message – no matter the platform. 10.23.2014

With the emergence and growing popularity of new types of media, companies have the opportunity to get creative, have fun, and humanize their messages more than ever before. But it also forces them to continuously reexamine how they communicate with their target audiences.

And as businesses increasingly understand and embrace the importance of building a media presence that is broad enough to allow them to participate in conversations across multiple platforms, the definition of what is “on message” has expanded rapidly. That’s a good thing.

But while companies should be engaging with audiences in new ways, it certainly doesn’t mean anything and everything is fair game. When brands step outside their comfort zones to join conversations or capitalize on trends on social media, they walk a fine line between “creative and edgy” and “inappropriate and awkward” – and it’s up to their PR experts to make sure they stay on the right track. Many companies are so eager to jump on the bandwagon of any trending hashtag that they don’t pause to consider its relevance, creating an avoidable PR disaster.

In one of the most recent examples, DiGiorno Pizza tried to capitalize on a trending hashtag by tweeting “#WhyIStayed You had pizza.” Had they done a little more research, they would have seen that the #WhyIStayed hashtag was being used by domestic violence survivors to share their stories about why they stayed in abusive relationships – a sensitive topic that a frozen pizza distributor should have steered clear of. In addition to numerous articles harshly criticizing the tweet at the time, the blowback continues even today: three articles on the first page of a Google search for “DiGiorno” mention the controversy.

Missteps by companies on social media can live on in infamy – some version of “The Most Cringeworthy 9/11 Tweets from Brands” goes viral every year – but that doesn’t mean they should stay away altogether. Businesses can successfully capitalize on new media by making sure everything they post fits into a proper messaging architecture. Here are two examples of companies doing it right: 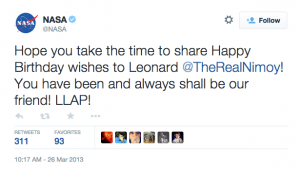 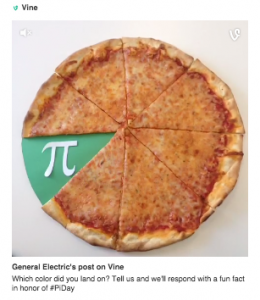 Though Star Trek is a fictional show and General Electric is not a pizza company, both organizations stayed on message – and did so in fun ways that engaged with followers and were relevant to specific audiences. That part is important: NASA’s tweet, for example, might not have been as relevant if it had been posted by the Food Network.

Companies shouldn’t be afraid to experiment with social media, but they should ask themselves a few questions before posting that “creative” tweet to make sure it’s a good decision: Is it relevant to our audience? Is it appropriate? And most importantly, is it on message?