Biggest Broadcast Blunders… and Tips to Avoid Them

Biggest Broadcast Blunders… and Tips to Avoid Them

British media was aflutter last month after Green Party leader Natalie Bennett gave what some called the worst interview ever given by a politician. What was supposed to be a friendly radio interview to officially launch her party’s general election campaign quickly unraveled as she was unable to answer even basic questions about her party’s housing policy – specifically how her party would pay for 50,000 new housing units.

Of course, she’s not the only high profile person to flub a broadcast appearance over specifics. Cue Brian Williams recanting his dramatic account of being shot down in a military helicopter.

But disastrous interviews can often have disastrous real-world consequences. Who can forget Sarah Palin’s devastating interview with Katie Couric in which she couldn’t think of a single newspaper or magazine she reads regularly. The result? She came off as uninformed and defensive at the same time. 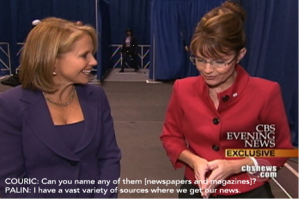 In order to avoid these interview pitfalls, here are some basic tips to keep in mind:

Stay on message. The best way to interview successfully is to prepare ahead of time. Anticipate the questions you’ll get asked and prepare answers to them. Not only will you know your message inside and out, but you’ll also be able to communicate it more effectively.

If you don’t know, don’t make it up. If you get a question that you don’t know how to answer, don’t, under any circumstances, invent a response. Instead, be truthful by saying “I don’t have an answer to that, but I can find out” and bridge to a topic you’d rather discuss. Draw on phrases like, “But perhaps an equally important issue here is….” or “It’s important to remember….”

Don’t lose your cool. Tone is key, and defensiveness is an immediate red flag. If you’re faced with a hostile reporter – or asked a loaded question that is based on something inaccurate – never argue. Instead, stay on message and be firm and direct in your responses. Remember to keep your composure as best you can. Don’t fidget or cross your arms. This behavior can make you seem angry.

Keep it simple. Most broadcast interviews are no longer than a minute – just long enough to get a sound bite or two. Keep your answers concise, tailored to your audience, and jargon-free. If you have to explain what you mean, you’re probably making it too complicated.

Most importantly, be yourself. Let your personality shine through. Not only will it buy you the respect of the interviewer, but it’ll also help you connect with your audience.