The latest Broadway season has been, by all accounts, a rousing success. Several new works, like Hadestown and The Prom, debuted to great acclaim. Even Oklahoma!, hardly new, received rave reviews for the revival, which featured a lead actress in a wheelchair. Audience attendance was at a record high, with nearly 15 million seats sold and the total box office hit a record, nearing $2 billion. 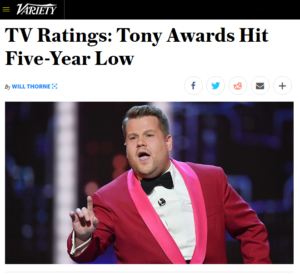 Yet, the Tony Awards hit an all-time low rating of .8 in the 18-49 demographic and fell below 6 million viewers for the first time, according to the Nielsen overnight numbers. With record-breaking consumption of Broadway shows, why is the Tony’s viewership dwindling? The answer lies in the nature of the television industry and the setup of the show.

As James Corden noted in his opening number as Tony’s host, recorded entertainment offerings have grown exponentially over the past several years, especially with the proliferation of streaming services like Hulu, Netflix, and Amazon Prime. As streaming threatens to eclipse live television’s popularity, particularly among the key 18-49 demographic, any cable or network television program should expect some audience attrition. Live awards shows in particular have lost large numbers of viewers across the board in recent years.

Greater competition has put pressure on awards shows to adapt to survive. The Oscars has attempted to do so, even if the series of misguided changes to scheduling and awards categories were ultimately scrapped. In the end, audience numbers for the Oscars went up by more than 3 million this year. Whether or not the Oscars made substantive changes remains to be seen, but its attempts at least generated buzz and drew more viewers.

The Tony’s, however, didn’t adapt at all this year. The awards ceremony has long been criticized for its eligibility criteria. To be eligible, shows must be staged in theaters with 500+ seats and Broadway labor contracts, which are the costliest in the industry. As a result, all of the eligible theaters are in Manhattan, and all but one are in the Times Square-area. This is just a small subset of all the theaters in New York, let alone across the country, and it means that only the least accessible—and typically most expensive—shows are considered for awards.

Beyond the institutional issues, the show just wasn’t that interesting this year. The New York Times criticized the show as “safe,” “unsurprising,” and “bland.” Variety said the show “seemed resolved to talk about not much of anything at all.” Most of the acceptance speeches were far from rousing. Rachel Chavkin, the sole female musical director in the entire Broadway season, was one of the few to use her speech to make a political statement. Otherwise, issues like Broadway’s persistent lack of diversity remained behind the scenes. One of the only attempts to shake things up was giving playwrights stage time, but their speeches did little to spark new interest in their works or comment on the state of the industry. The lack of innovation and unwillingness to push the envelope meant the show, which ran over three hours, understandably couldn’t hold viewers’ attention.

As competition for the attention of audiences grows fiercer, staunch traditionalists like the Tony’s must adapt to changing viewer preferences if they are to prosper. Otherwise, they risk further alienating an already dwindling and otherwise-entertained audience.