Communication leaders in the time of coronavirus

Communication leaders in the time of coronavirus

Crises present a unique opportunity for leaders to show the public their true character. Beyond the actions they take, their communication plays a critical role in how they are judged.

Think of FDR in his fireside chats during the Great Depression, reassuring the country during one of the greatest periods of American uncertainty and despair. Contrast that with George W. Bush’s response to Hurricane Katrina, as he failed to cut short a ranch vacation and communicated with the public only after disaster had struck.

Today, as COVID-19 devastates public health and the economy, New York’s governor, Andrew Cuomo, formerly better known as the state’s resident bully and control freak, has emerged as a figure of admiration for the American people. He has won trust and respect from people across the country, while also reassuring our anxiety-ridden hearts and minds. Here are a few lessons from his communications during this crisis:

Be visible and transparent

For weeks now, Governor Cuomo has held daily press briefings to provide coronavirus updates. During them, he is incredibly transparent, delivering hard facts and figures about the timeline of events, projection models, hospitalization rates, and any other relevant statistics. He’s up front about what he doesn’t know and clearly explains any changes in the rapidly evolving situation. By sticking to the facts and keeping the public in the loop, he helps us better understand his decisions and earns buy-in. 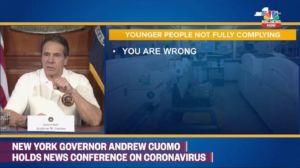 Not every message is reassuring. During one press conference Governor Cuomo told the public, “We can’t handle the worst case scenarios; we can’t even handle the moderate case scenarios.” His honesty is especially critical when we all have a responsibility to be part of the solution.

While he may not share earth-shattering updates every day, simply being visible at the briefings and on social media demonstrates that someone is taking charge in this fight.

Governor Cuomo knows how to connect with his audience. He shares relatable stories about himself and his family to emphasize that he’s going through the same challenges we all are.

This was especially evident when his brother, Chris Cuomo, tested positive for COVID-19. The governor responded, saying, “He’s young, in good shape, strong – not as strong as he thinks – but he will be fine,” and discussing the impact on his family. His reflections make him relatable as we all struggle with this unprecedented situation, and it’s comforting to know our leader is in it with us.

Although some experts argue that New York could have prevented needless illness and death if city and state leaders had responded earlier to the coronavirus threat, Cuomo has at least been clear in communicating what action he is – or initially wasn’t – taking.

From introducing a New York-branded hand-sanitizer, dubbed NYS Clean, in early March, to implementing a “pause” on New York through executive order, to announcing a multistate task force to formulate a reopening plan, Governor Cuomo has continued to clearly communicate steps New York is taking to stop the spread of coronavirus. He doesn’t flip flop on his statewide decisions and through that, he earns our respect.

In just one month, Governor Cuomo’s approval ratings have increased by 27%, with 87% of New Yorkers approving of his handling of the coronavirus crisis, including an overwhelming majority of Republicans. In the difficult weeks and months ahead, Governor Cuomo’s playbook can help other local, state, and federal leaders communicate about this crisis to preserve public health and public trust.