IT’S TIME TO GIVE THE CHAMPS WHAT THEY DESERVE

IT’S TIME TO GIVE THE CHAMPS WHAT THEY DESERVE

Group Gordon’s Derek Nagle examines the ongoing fight for equal pay by the U.S. Women’s National Team in the wake of their World Cup victory. 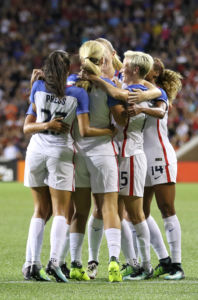 This past Sunday at the Women’s World Cup final in France, the United States Women’s National Soccer team emerged victorious, beating the Netherlands 2-0. This was the U.S. women’s 2nd consecutive World Cup win and their 4th championship overall. Although they were crowned champions after the final whistle, the team still has a remaining obstacle at home: the fight for equal pay.

Rewind to March 8, International Women’s Day, when team leaders Alex Morgan, Carli Lloyd, Megan Rapinoe, and Becky Sauerbrunn filed a lawsuit against the U.S. Soccer Federation alleging that female players are paid less than the members of the U.S. men’s team, which would be in violation of the U.S. Equal Pay Act and Title VII of the Civil Rights Act.

A look at the numbers reveals just how wide the pay gap is. The women’s team can receive a maximum of $200,000 per player in prize money from the tournament – a far cry from the maximum potential earnings of $1,114,429 per player for the men’s team.

Some blame the pay discrepancy on viewership of women’s games. This argument wouldn’t have held up on Sunday as the final blew past predictions, with roughly 14 million people in the U.S. tuning in to watch the game according to Nielsen ratings. Last year’s Men’s World Cup final averaged 11.4 million U.S. viewers, which means the women drew a 22% bigger audience. Nike President and CEO Mike Parker also confirmed in a recent earnings report that the 2019 U.S. women’s home jersey is the top-selling soccer jersey ever sold in one season.

These recent developments have caused a whirlwind of attention from media outlets across the U.S. Many prominent figures have also joined the USWNT in calling for equal pay. Athletes like Billie Jean King, Serena Williams, and Aaron Rogers, to entertainers like Snoop Dogg and Jamie Lee Curtis, to political figures Rep. Alexandria Ocasio-Cortez and Sen. Chuck Schumer are increasing the pressure on the USSF to address this issue.

Congratulations to the #USWNT on their 4th World Cup win! These athletes have brought more attention, support, & pride to women’s sport than perhaps any other team in history. It is long past time to pay them what they rightly deserve. 🇺🇸🏆🏆🏆🏆 #USAvNED #WorldCupfinal #EqualPay

Now can the #USWNT get equal pay? https://t.co/SPuwU8TRXK

So where do the World Cup champions go from here? The national spotlight, media outcry, and momentum from their championship win will be helpful for scoring this crucial goal. In a big first step, New York Gov. Andrew Cuomo signed an equal pay bill into law ahead of the women’s championship parade in New York City, eliminating a loophole that allowed for gender discrimination in pay for the same jobs. But they need to keep the pressure on and keep their supporters engaged if they don’t want to lose steam in this fight. The upcoming celebration tour is an opportunity for the team to call on their supporters for sustained support and public pressure.

Nike released an inspiring ad right after the victory, which featured the words “I believe that we will make our voices heard, and TV shows will be talking about us every single day and not just once every four years.” In the current news landscape, where the media’s attention constantly shifts to new issues and crises, keeping this issue at the top of people’s minds will be a challenge. But, to succeed in its goal, the team needs to make sure that the media, the public, and their other influential supporters continue to hear their voices and talk about them every day until the USSF acts to close the pay gap.

The U.S. team made us proud, and it’s time they get what they deserve.