Our watch has ended but the fandom lives on

Our watch has ended but the fandom lives on

Group Gordon’s Rhani Franklin explores how fandom participation has changed in the age of social media.

To say that the series finale of Game of Thrones sparked disappointment would be an understatement. The long-awaited finale of one of television’s most talked-about shows was also the series’ lowest-rated episode. What made the show’s tragic (in execution rather than plot) ending bearable, however, was following other fans’ reactions live on social media. Scrolling through Twitter and Reddit, I found myself more entertained by the memes and gifs generated by fans than the source material itself. 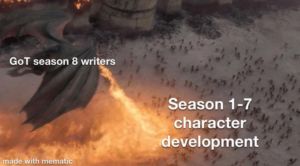 Fandom is hardly a new phenomenon. Trekkies donned pointy ears at conventions decades before Potterheads started sporting lightning bolts on their foreheads at midnight film premieres and book releases. But social media has drastically changed the look and feel of fan culture. Everyone, not just die-hard fans, now has access to the discussion and can even influence the object of their fandom at times. Platforms like Twitter, Facebook, and Reddit, among others, have enabled the entire landscape of participatory culture to pour out into spaces that are much more inclusive and far-reaching than ever before.

Social media channels not only create opportunities for fans to interact with one another; they also open doors for fans to engage with creators more actively than they could have before. For example, a Change.org petition calling on “more competent writers” to rewrite the last season of Game of Thrones made its rounds on the Internet earlier this month, receiving more than 1.5 million signatures. Although an official rewrite is unlikely, that the petition could garner national attention on such a large scale is a true testament to social media’s power in 2019. 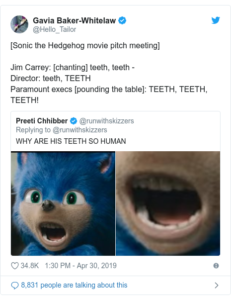 Similarly, the first trailer for the upcoming live-action film based on the video game character Sonic the Hedgehog earned harsh criticism upon its release in April. When fans complained about the off-putting appearance of the computer-animated main character—namely his human-like teeth—the film’s director responded by delaying the film’s release date in order to “make Sonic just right.” This likely wouldn’t have been possible 15 years ago when fan engagement primarily consisted of fan forums and chatrooms that enabled fans to connect with each other rather than direct their feedback to networks and creators.

While social media has created promising new avenues for fan participation and communication, it can also get ugly, with angry, faceless mobs harassing those with opposing views. Nicki Minaj’s fans are notorious for attacking critics on social media, going as far as finding their personal contact information and telling them to kill themselves. In another instance, Star Wars star Kelly Marie Tran was driven off social media for a brief period last June after a fandom faction coordinated a racist and misogynistic attack against her. In these cases, and many others, fans’ enthusiasm turned dangerous.

Whether you loved or hated a movie, TV show, or singer’s latest single (ahem, Taylor Swift), there are most likely at least several thousand others who share your opinion and are tweeting, posting, Redditing, etc. about it as we speak. No longer confined to basements, bookstores, and convention centers, fandoms now thrive in a public forum accessible to most instead of some, providing meaningful and interactive ways for all of us to engage with the media we love most.