Group Gordon’s Anna Clark blogs about the features that distinguish PR from advertising. 6.2.15

According to an old business adage, “Advertising is what you pay for, and publicity is what you pray for.” While public relations (PR) and advertising both play key roles in promoting a company and its products or services, there are some fundamental differences between the two that remain widely misunderstood. In a nutshell, PR focuses on promoting the positive image of a company via unpaid communications, whereas advertising focuses on promoting the sale of a company’s products or services via paid announcements.

Although there are numerous comparisons to draw between PR and advertising – some obvious, some less so – here are the top five distinguishing factors.

The most obvious difference between PR and advertising is that advertising is paid media and PR is earned media. With advertising, you pay for a specific message to be published or aired, so you know exactly where and when it will be featured. With PR, media exposure is free. PR professionals develop relationships with media and utilize various tactics such as press releases and news conferences to earn and sustain media coverage.

Another important difference between PR and advertising is the level of control of the message. With advertising, you have full control over the message and creative design – you know exactly what an ad will say, where and when it will appear, and how often it will be featured. With PR, there is no way to control the message or even guarantee placement. Media outlets are not obliged to cover a news announcement just because they receive a press release (in fact, that is rarely reason enough). Instead, a smart PR approach will present story ideas to reporters in a way that is valuable to their reporting and develop relationships with media to ensure trust and accuracy in reporting.

The credibility attributed to earned versus paid media can vary significantly and is one area in which PR has major benefits over advertising. When people view an ad, they are generally aware that a company paid to promote its products or services. As a result, they often regard ads with some degree of skepticism. PR, on the other hand, involves reporters generating independent and unbiased media coverage. Based on objective third-party evaluation, earned media plays a significant role in shaping public perception. Many companies choose to invest in PR to build this kind of credibility. 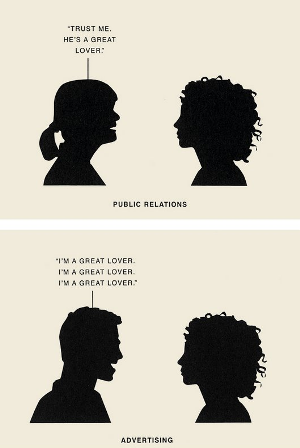 Content and style also differ significantly when it comes to advertising and PR. Advertising often involves colorful, descriptive language that is peppered with buzz words. Since an ad is charged with pushing a company and its products or services, the content needs to build (positive) hype. PR writing tends to be strictly no-nonsense – informative, concise, and current. Media will typically disregard anything that is blatantly self-promotional, so PR professionals use relevant news hooks, data, and other tools to subtly weave in messaging.

The duration of coverage is another way that advertising and PR differ from one another. With advertising, you pay for an ad to be featured as many times as your budget allows. PR generates earned media, which typically means one piece of coverage, since reporters need to keep content fresh and current. However, PR has the potential to generate media placements in multiple outlets across multiple mediums. With tailored outreach efforts to individual reporters, PR professionals can help maximize potential exposure.

PR and advertising are both effective ways to promote a company and its products or services, and most successful communications strategies will include both. While advertising enables companies to push key messages, PR goes beyond to build credibility and create sustained and positive media exposure. Knowing the differences will help you develop realistic goals, expectations, and measures of success for your PR and advertising efforts.