Many A-listers have recently found themselves in hot water for a major element of their lavish lifestyles: private jets. It all started with an Instagram post of Kylie Jenner and Travis Scott standing between two private jets with the caption “you wanna take mine or yours?”. While Jenner’s online presence typically relies on her followers aspiring to her extravagant life, the obvious environmental impacts of her frequent flights led the internet to critique the sustainability of her actions. 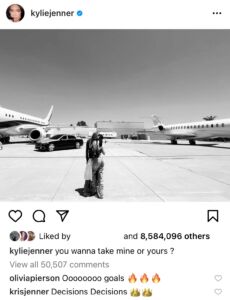 Scrutiny for Jenner grew after she took a 17-minute flight in her jet, a journey that would have taken her 40 minutes by car. This spurred a wider look into the environmental impact of celebrities’ private jets, culminating in Yard publishing a list of the celebrities with the worst private jet CO2 emissions. The staggering numbers revealed in this report further fueled online discourse around how celebrities and public figures are not just ignoring their role in the climate crisis, but actively perpetuating harm.

Celebrities facing backlash at this moment are facing a very common issue in crisis management – the art of accountability.

There have been two forms of responses to this discourse:

The first has been to shift accountability away from the individual celebrity. Taylor Swift, who was at the top of the CO2 emissions list, used this approach in a statement that claimed her “jet is loaned out regularly to other individuals, to attribute most or all of these trips to her is blatantly incorrect.” Drake, whose recent 14-minute flight generated online attention, replied to the comments of an Instagram post saying “This is just them moving planes to whatever airport they are being stored at for anyone who was interested in the logistics, nobody takes that flight.”

Shifting accountability has only gained Swift and Drake more criticism. The immensity of their carbon footprint compared to the average person makes the lending or moving of private jets an unrelatable and disingenuous excuse to today’s increasingly environmentally conscious world.

The other option has been to ignore the controversy altogether. Celebrities, including Kylie Jenner, have decided the best course of action is to say nothing.

Remaining silent has been perceived largely as an attitude of apathy. The public has been especially critical of celebrities on the list who remain silent on this matter, despite previously advocating for sustainable lifestyles to their followers.

While most of us will never face this specific dilemma, there are lessons to be learned in how we approach crisis management in the face of legitimate criticism. Here are some key considerations:

This discourse has been grounded in records and data that demonstrate just how much carbon is being emitted by private jets. When celebrities have attempted to shift blame or ignore the issue, it has only brought further criticism. If your organization is facing legitimate criticism, whether its environmental issues or a leader’s gaffe, the first step to successful crisis management is taking accountability. Even a simple acknowledgement of accountability for an action can go a long way with stakeholders.

After taking accountability, an organization and its leadership must lay out their plan to address any harm caused and change their behavior. Without actionable steps, any statements of accountability can be viewed as hollow or disingenuous. In the callouts of celebrities and their carbon footprint, we can see the growing desire for the most powerful players in our world to make positive changes for the future. As of now, these celebrities have not stepped up to the plate (though Kourtney Kardashian was spotted flying commercial), but your organization can and should navigate crisis management with the intention to create and communicate long-term, impactful change.

Any changes made to hold yourself and your organization accountable to the public should be paired with continued transparency. When organizations are open and honest about mistakes and areas for improvement, they can get ahead of future crisis management scenarios and avoid being publicly called out for lack of accountability and action. For these celebrities and anyone handling a reputation management situation, shifting the narrative means changing how you tell your story moving forward.

These celebrities have provided us with examples of how not to approach crisis management in the face of valid critiques. PR professionals – whether you’re Taylor Swift’s famed publicist or a corporate communicator – can and should follow a better strategy to managing a crisis and taking accountability.