The whole world watched last Sunday night as former royals Meghan Markle and Prince Harry sat down with Oprah for a “bombshell” interview where the couple revealed shocking details about their lives as members of the royal family. While no one could have anticipated the scandalous accusations made in the interview, this event was a long time in the making and the most recent great PR play in a long list of strategic power moves from my favorite famous couple. 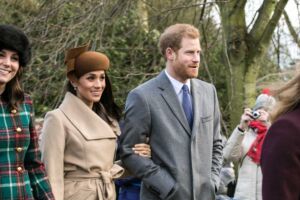 The British monarchy has been around for what feels like forever, with an old-school, stuffy media presence to match (with the exception of the days of Princess Diana). So, it was a shock to the world in 2017 when the youngest son of Prince Charles and the late Diana became engaged to a biracial *gasp* American *gasp* divorced *gasp* actress *gasp*. Here was an opportunity for inevitable, important conversations about the conventions of the royal family – and a golden ticket to update their antiquated image in the eyes of a progressing world.

Yet these conversations never seemed to happen. Instead, British tabloids immediately began maligning Meghan, often in contrast to her sister-in-law-to-be, Kate, and with racist undertones. The family, instead of defending their newest member and at the cost of her reputation and mental health, remained silent. While the family historically does not directly speak to the press, an opportunity fell into their lap to buck convention and do not only what was right but what was best for their brand. Instead, they stuck to protocol, fueling even deeper anger among royal fans resentful about the paparazzi-driven death of beloved Diana.

When Meghan and Harry then made the decision to step down as senior members of the royal family, fueled by a combination of Meghan’s poor treatment by the press and safety concerns for her and Harry’s son, Archie, the British media dubbed the move “Megxit,” blaming it on Meghan’s “diva demands.” Again, instead of coming to the defense of the first British royal of color, the family stayed mum. So, the Sussexes took the narrative into their own hands, releasing a statement on Instagram in a royally unconventional yet modern move.

Ultimately, Meghan, Harry, and baby Archie moved to Los Angeles, and last month Buckingham Palace announced that they would not be returning to their royal duties. But they have been hard at work taking all the right steps to maintain a positive image in the public eye, culminating in the Oprah interview that was seen by nearly 17 million viewers and has dominated the news cycle ever since.

Oprah What GIF from Oprah GIFs

I’m no royal expert, but I do know a few things about PR, and to say that the royal family “fumbled the PR football” would be an understatement. Instead of embracing a new generation of fans who viewed Meghan’s entrance into the family as a step in the right direction and altering their relationship with media to prevent racism and cruelty, they sat on their hands. Their silence severely damaged family ties, but it also gave Meghan and Harry total reign over the narrative, as we’ve seen through their independent statements and most recently, the Oprah interview. Once you lose control of the narrative, there isn’t much you can do to get it back.

God save the Queen’s PR!