The 2022 midterm elections are upon us, and candidates are vying for attention in the media equivalent of a rush hour subway car. It can be impossible to break through when the political landscape is dominated by major legislation, congressional drama, criminal investigations, and so much more. When you combine this environment with the typical poll-tested, playing-it-safe style of campaign messaging, it’s hard to imagine a candidate getting anyone excited these days.

John Fetterman, the Democratic U.S. Senate candidate for Pennsylvania, has found a way to cut through the noise. His approach to social media has been hilarious, hard-hitting, honest, and smart – and there’s a lot to learn from how he’s breaking the norms to take on his Republican opponent, Dr. Mehmet Oz.

An April 2022 video of Dr. Oz in a store he misnamed as “Wegner’s” went viral in August, showing the candidate wandering the produce aisles and conveying his disbelief at the prices of an absurd array of vegetables and dips. The self-inflicted wound showed Oz as out-of-touch with grocery store prices and also what makes for a good veggie tray. The Fetterman team reacted swiftly with an all-encompassing response, including tweets and new merch – leading to an influx of donations.

Speed was absolutely critical here. By jumping on the video as soon as it started trending, the Fetterman campaign was able to squeeze as much as possible out of the opportunity and massively increase the video’s reach across social media. Red tape and bureaucracy only hold brands back online.

His team also earned bonus points for staying on message and connecting the crudité video back to the passage of the Inflation Reduction Act, showing it’s possible to dig at your opponent while conveying a positive message about your own cause.

A key, consistent point in the Fetterman campaign is the accusation that Dr. Oz’s primary residence is in New Jersey – not Pennsylvania. Nothing made this point better than a video from Jersey Shore star Snooki, which hammers home the point that New Jersey will welcome Oz back after the campaign. The video cost the campaign a mere $300 through Cameo, a platform that lets anyone purchase a short video with a personalized message from a celebrity. This relatively small expense created an outsized impact and dominated headlines.

It’s fair to say that not every brand has the viral power of a political campaign. But brands make decisions all the time about whether to allocate budget behind paid social media content, including advertising, video production, and graphics. That spend doesn’t have to be expensive to resonate; it must be on message.

3. Define your brand – and stick to it

It may seem like just poking fun at an opponent, but everything the Fetterman campaign does on social media is adhering closely to his brand. It’s easier to draw a contrast with a rich TV doctor by reinforcing Fetterman’s Pennsylvania roots and working-class image. You know what to expect from a Fetterman campaign post, regardless of what comes up in the news or with Dr. Oz.

In the below tweet, for example, he is establishing his Pennsylvania-first approach, offering a solution, and criticizing Oz – perfectly on-message points conveyed in his signature casual style. 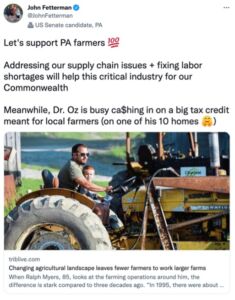 Your company or organization doesn’t have to adopt the irreverent tone of this campaign to be successful. Think about what makes your brand genuinely unique and the kinds of messages that will connect with your core audience. The clearer you are on those points, the more disciplined you can be about sticking to them – on and off social media.