The Art of Embracing Criticism

The Art of Embracing Criticism

Nobody likes criticism. And companies are no different.

Long overdue societal conversations about justice and equity are inspiring people to take a hard look at brands and point out where they fall short. At the same time, the continued growth of social media and user generated content are providing a powerful bully pulpit for those with feedback to share.

In this climate, some companies are struggling. They fear that anything they do, especially in the marketing realm, will be met with skepticism. They recognize that criticism, even if limited to a vocal minority, has more cultural currency than ever before. When they are attacked, particularly for something they view as trivial, they respond defensively.

This is a failing strategy. The companies that will succeed are those that accept criticism as inevitable and a natural part of how the public interacts with them in 2021. The binary world of good or bad is gone. Harsh criticism is not mutually exclusive with support.

Criticism should be embraced, even if it feels unfair. We are in a moment where conversations that have long been swept under the rug are finally coming to light and finding traction. Companies need to show their support for that trend and that they are committed, at the very least, to listening. Those that are too insecure to do so will face the consequences.

Peloton made the mistake of reacting defensively to critics of a holiday 2019 ad campaign. After many criticized the ads as sexist and dystopian, the company put out an official statement that read in part: “While we’re disappointed in how some have misinterpreted this commercial, we are encouraged by — and grateful for — the outpouring of support we’ve received from those who understand what we were trying to communicate.”

Terrible. While leadership may have felt the criticism was unfair, by dismissing feedback, they showed themselves to be inflexible and uninterested in engaging in conversations about sexism and how companies portray women. Shortly after the statement, the value of the company’s shares were down by more than $1 billion. 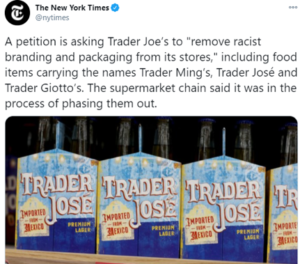 Another example is Trader Joe’s, which received criticism for international products with names like Trader Ming’s and Trader Jose. While first claiming they were phasing the products out, the company eventually decided it did nothing wrong, arguing in their statement: “…we disagree that any of these labels are racist. We do not make decisions based on petitions.” The company made the mistake of thinking that they only had two options: get rid of the products or dismiss the criticism outright. While Trader Joe’s has the right to stand by its products, it is unacceptable (and the wrong communications strategy) to demonstrate an unwillingness to engage with those who found the products offensive.

In contrast, Sephora did a much better job of embracing criticism. In the wake of recent conversations about diversity and inclusion, the company proactively sought out feedback by conducting a series of customer and employee surveys to discover where they could be better. Based on that data, last week they announced a comprehensive plan on how they would limit discrimination in their stores, including through employee training and product offerings. The substance of the plan coupled with the company’s willingness to engage with uncomfortable negative feedback resulted in significant praise.

Companies need to understand that criticism is inevitable. That does not mean that it is always entirely fair or that it necessarily requires a significant operational response. But it is essential that brands consistently demonstrate their openness and willingness to engage with feedback. A hostile or dismissive response will always backfire and turn off far more people than being open to a conversation about potential shortfalls, no matter how uncomfortable.