The Power of Social Media Campaigns to Effect Change: #NotAgainSU

The Power of Social Media Campaigns to Effect Change: #NotAgainSU

This past November, Syracuse University found itself in the national spotlight for a crisis concerning systematic racism. More than 11 hateful and racist crimes were reported on campus, with these accounts including verbal abuse, vandalism, and an alleged white supremacist manifesto. The University failed to alert students in a timely fashion, and attempted to hide the initial event of racist vandalism by asking students not to share photos or speak of the account.

Poor communication by the University and a growing lack of trust in its Department of Public Safety inspired students to come together to organize an around-the-clock sit-in at the Barnes Center at the Arch – this marked the beginning of the #NotAgainSU movement.

In recent years, we have seen social change spurred through social media platforms with movements like #BlackLivesMatter, #LoveWins, and #MeToo. The unique spaces of Twitter and Instagram have aided in the growth of these campaigns as they allow people to easily rally together and share their stories and support of other users.

These widespread hashtags have led the way for smaller movements like #NotAgainSU to succeed in effecting change. #NotAgainSU offers important lessons on how to lead an effective social media campaign for change. 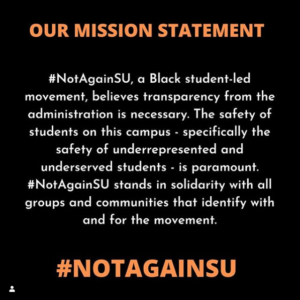 Students on the Syracuse campus came together within hours to arrange the sit-in, build their social media pages, and title the movement. Right away they began sharing pictures and videos live from the Barnes Center to keep followers up to date with what they were doing, making it easy for more students to learn about #NotAgainSU and to get involved. This quick dissemination and easy-to access information was effective because it allowed the campaign to grow very quickly.

Since the beginning of the movement, blurred portraits were shared on social media with quotes from members of #NotAgainSU explaining what the movement means to them. By never placing a name or face directly to leaders of the movement, they positioned themselves as a unified front solely dedicated to confronting the issue at hand. This strategy allowed them to keep the focus on the collective call for necessary change at Syracuse rather than on one specific incident or person.

On the first day of the sit-in, #NotAgainSU listed 19 demands they wanted SU to take action on, which included increased levels of engagement between Chancellor Syverud and students, mandatory diversity training, and improved security in campus facilities. They also called on other organizations in the Syracuse community to join the movement by cancelling meeting and events to show their support. By delivering direct requests to their community, #NotAgainSU was able to grow its following and force the administration to take action.

The strength of the campaign garnered national media coverage, not allowing the administration to ignore the movement without receiving further public backlash. Collectively, all of the different aspects of the social media campaign helped push the Chancellor to address the campus-wide issue and sign the list of demands created by #NotAgainSU. With the consistent growth of social media’s influence, advocates for social change can harness these powerful platforms to make their message heard, apply pressure, and rally support.